We're mightily relieved to see these kits back in stock after running out over Easter.

Our hugely popular gold & gunmetal Sirocco pen kits are back in stock - Phew!

The Beaufort Sirocco is the original British designed pen kit to use Sierra compatible tubes. What's the advantage of Sierra compatible tubes? Well, it means that all the masses of pen blanks out there, cast on Sierra tubes by the many, many blank makers in the pen making comunity, will all fit a Sirocco pen kit. The major difference between a Sirocco and a Sierra though is, apart from being smaller, better balanced and less weighty, it's mechanism is mounted in the finial, not down the bottom in the nib section. It means that it's easier to access the refill, and it's, well, smaller, better balanced and less weighty. It also has a mechanism that's as smooth as butter.

The Sirocco pen kit is supplied with a Parker style Beaufort Ink refill as standard, and is available in a choice of 7 different platings. 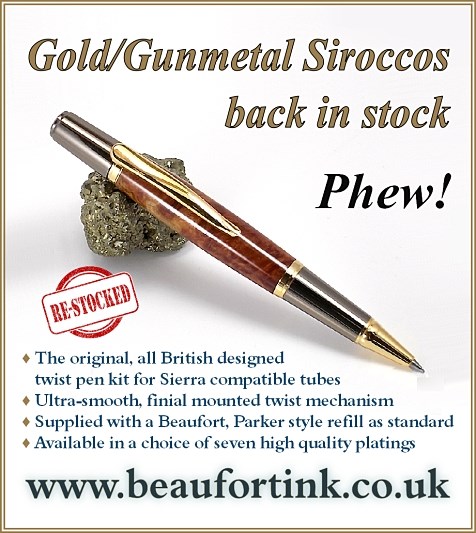