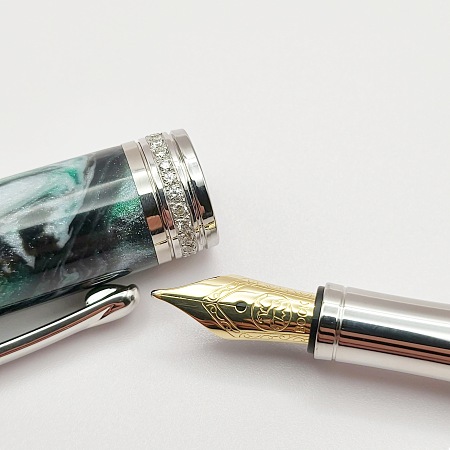 Who introduced it? We have absolutely no idea, but unlike some other tenuous attempts at creating international something-or-other days, International Fountain Pen Day has definitely caught on in the psyche and consciousness of those who are in to fountain pens, and is now very much “a thing” every year. It’s a chance for fountain pen fans to celebrate and indulge in their hobby, and it’s a chance for those within the pen industry to shout a little bit about their products and services.

So.... we thought we’d show you a very special fountain pen, made by one of our customers, Douglas Reid, who received a commission to supply a fully blinged-up fountain pen, but without the bling. That sounds a bit ridiculous we grant you, but his brief was to make a pen that shouted luxury, without being kitsch and without screaming bad taste. Tasteful opulence might perhaps be a better way to describe it.

Oh, and green too please. 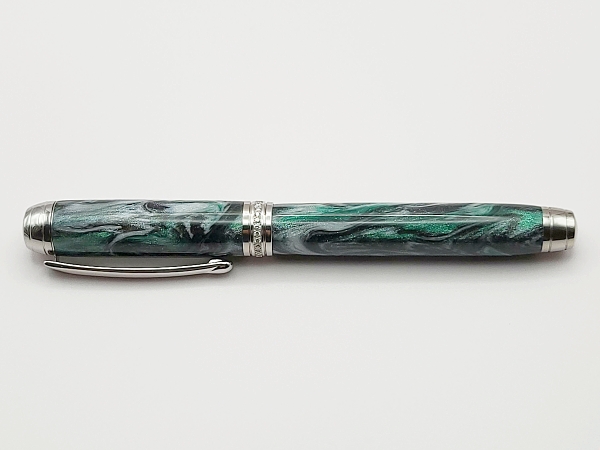 Douglas chose to use one of our Mistral fountain pen kits from which to make his pen. Anyone who knows our Mistral pen kits knows they are up there at the high end of the market, they know that Mistrals have the flexibility to be customised by making different accents, and they know that the nib, which is already a high quality German nib, can be swapped out and upgraded to any of the Bock size 5 nibs on our website with no effort at all.

He made the cap and barrel from a DiamondCast pen blank, which are impregnated throughout with tiny diamond particles that give the pen an outstanding sparkle. The particular blank he chose is called Emerald City. He swapped the nib for a Bock 18k gold nib - yes the nib in these photos is solid 18 karat gold, and as if that wasn’t enough, he collaborated with a jeweller to make an accent ring for the cap centre band that comprises almost half a carat of cut diamonds - not crystal imitations, the genuine article. 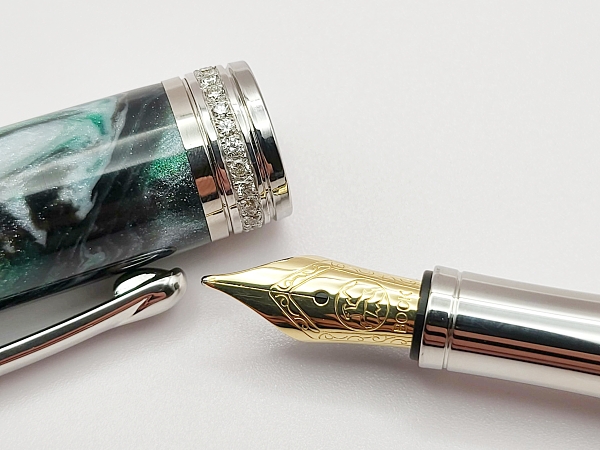 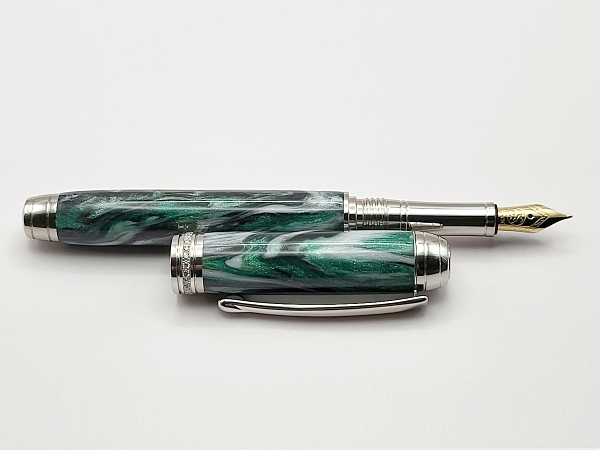 Does it meet the brief? We think so, and then some. So does Douglas, who is understandably very proud of his work, and more importantly, so does his customer.

How much did he charge? We couldn't tell you because we didn’t ask, but it’s fair to say that “quite a lot” would be a reasonable assumption.

Whatever your involvement with fountain pens, we hope you find some small way to embrace International Fountain Pen Day, whether it be making a pen, writing a few notes or a letter, creating an ink drawing or whatever else takes your fancy.

And if you make pens from Beaufort Ink components, be they fountain pens, ballpoints, rollerballs or pencils, do please send us a photo of your work. We love seeing what our customers produce, and with your permission, your photo could well end up in our Gallery.