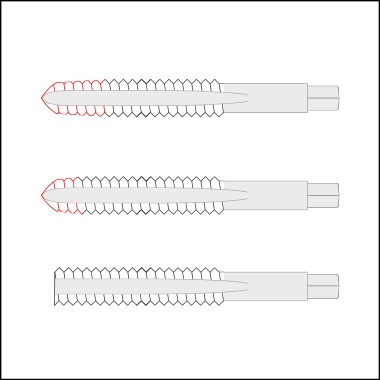 There are choices to be made when you're buying thread taps for making custom pens, or so called kitless pens or bespoke pens. Unless you have a little engineering experience, it can be difficult to know the differences between each type of thread tap and what they're used for, so below is a simple explanation of each one, to help you decide which type or types you need.

Essentially, there are three main types - the underlying tool is the same thing in each case, but some of the cutters are ground away in certain ways to enable them to perform different functions. Confusingly though, they’re known by different names in different countries. The name by which they are known in the UK is in bold, so importantly, don't get your plugs in a muddle, as 5000 miles of water between here and the US could mean the difference between happiness and disappointment.

1. Starter Tap (in the US this is called a Taper Tap)

A Starter Tap has the first 6 or so cutters ground away to a taper. This makes it easier to insert the tap and begin the cut.

2. Intermediate Tap (in the US this is called a Plug Tap)

An Intermediate Tap also has tapered cutters, but only about 3 or so. It can be used to begin a cut if you have the confidence to do so, but it’s main purpose is to continue the cut begun by the Starter Tap, so that it’s quickly widened to the full diameter of the thread.

3. Plug Tap (in the US this is called a Bottoming Tap)

A Plug Tap is primarily for tapping into a blind hole - a hole previously begun with one of the taps above, were the exit is narrower than the entrance or where there’s no exit at all. All of its cutters are intact and it has a flat end, therefore the tap goes right up to the end of the hole at the full diameter of the thread. It isn’t suitable for beginning a cut, but it is useful  for continuing a cut in translucent or transparent material, where you’ll see the thread from the outside. In such cases it’s desirable to have a clean finish to the thread rather than appear to just peter out, which is the effect you’d see with either of the other two types above.

So, not particularly complicated once it's explained, in fact very straight forward, and we'll talk about thread dies, triple lead threads and other perceived mysteries in future blog posts.

We have an entire article dedicated to answering some of the frequently asked questions surrounding custom pen making, to help you come to terms with some of the basics you are going to encounter at the start of your journey, so if you don't want to wait for future posts, you can read about all this sort of stuff there, and a lot more besides. 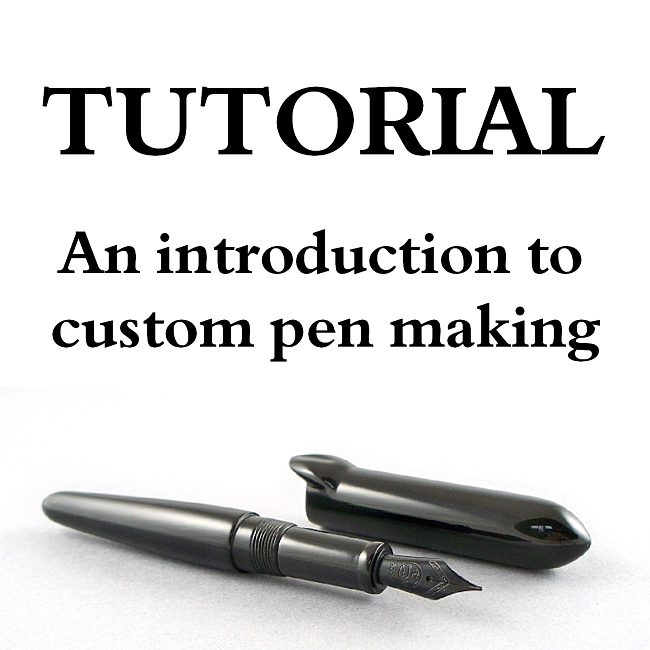 An Introduction to Custom Pen Making